Enter your dog's name, select an icon and you'll instantly see EVERYTHING personalised just for your Siberian Husky...
Get Started
or choose from over 300 breeds
or login to fetch your dogs
Choose your dog 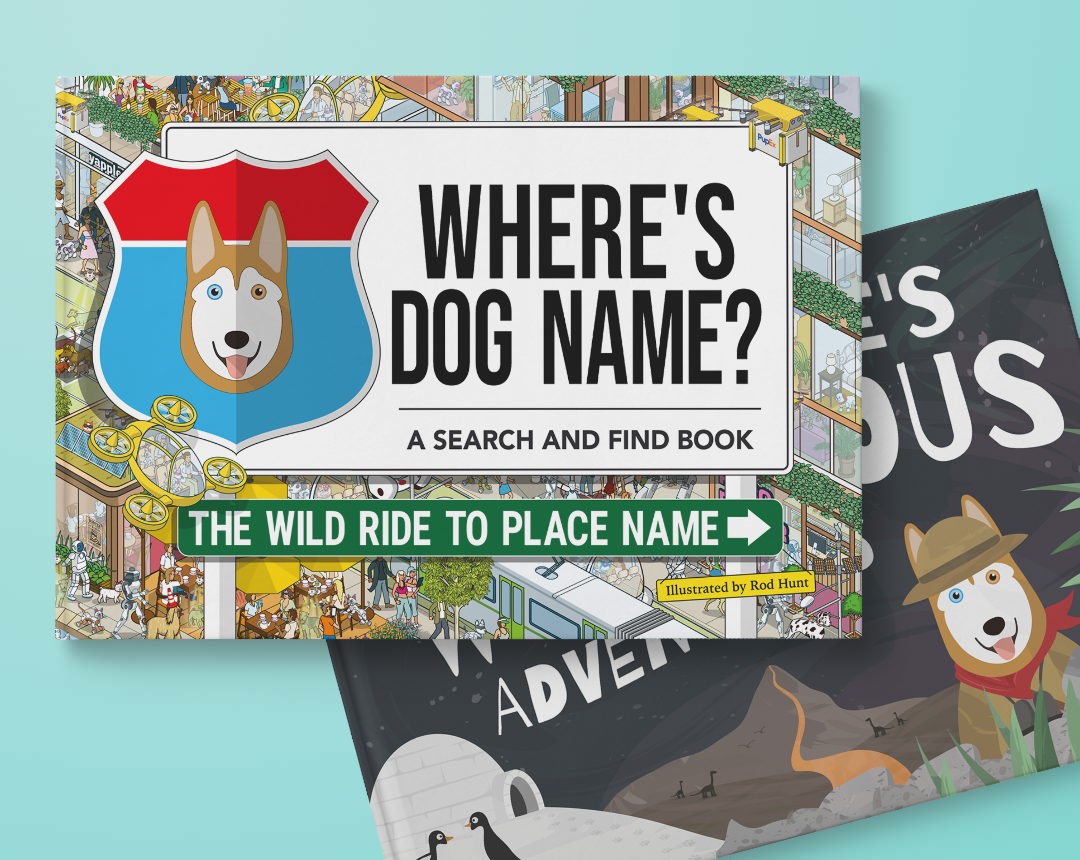 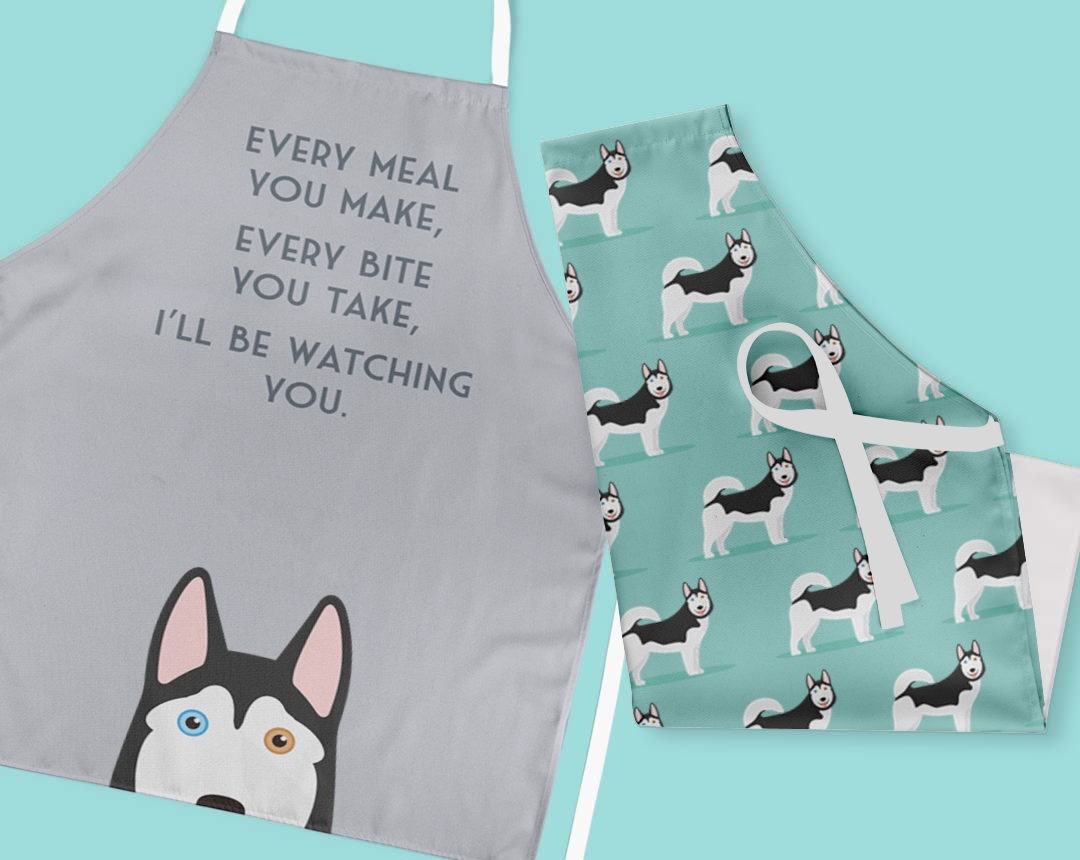 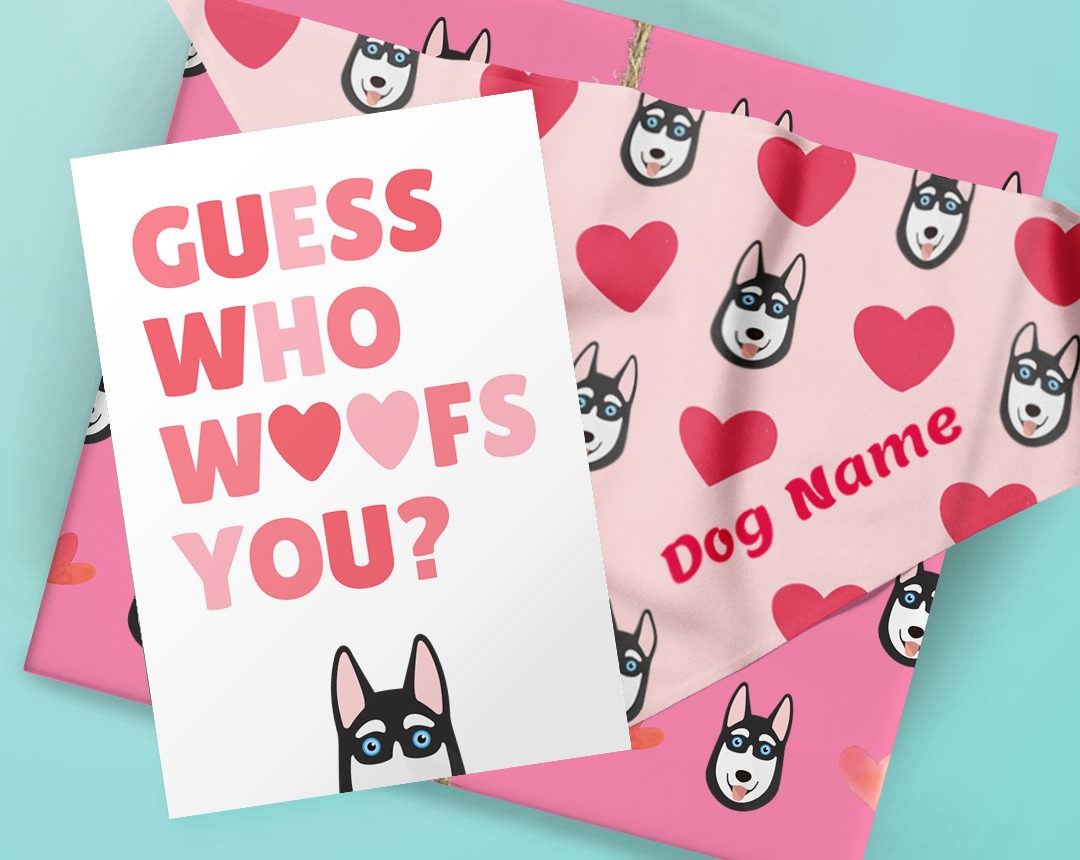 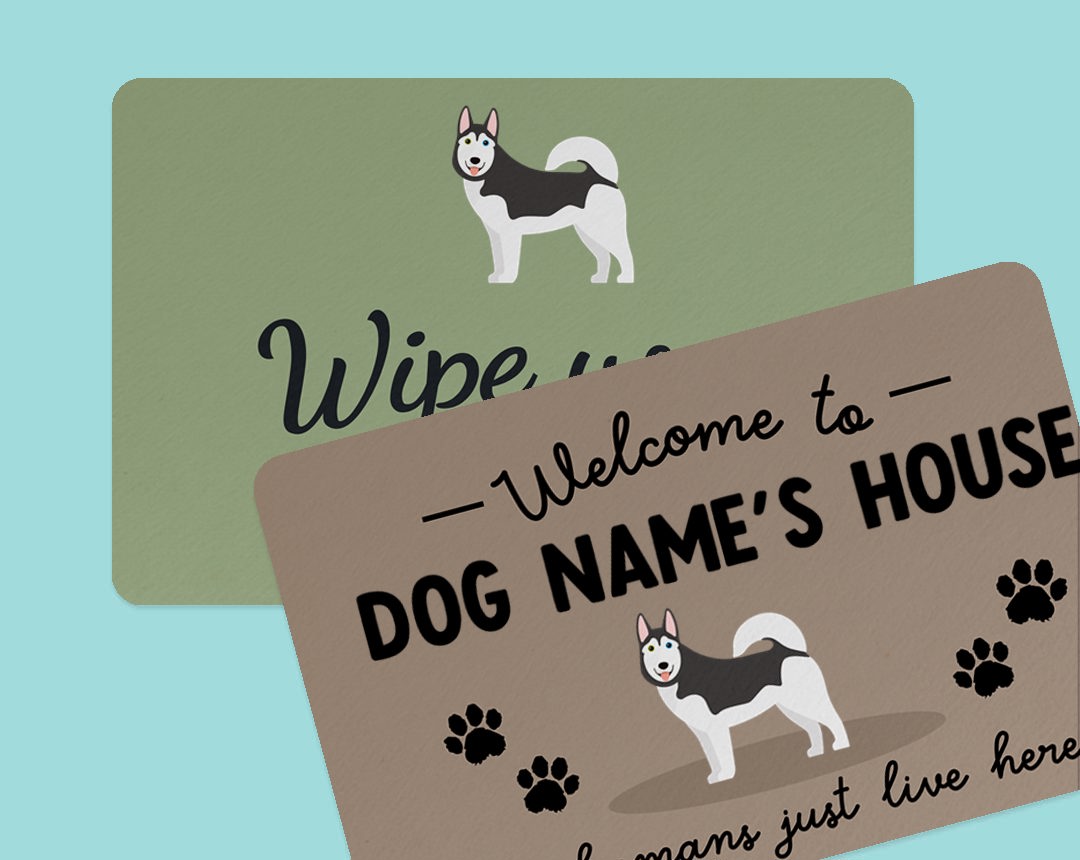 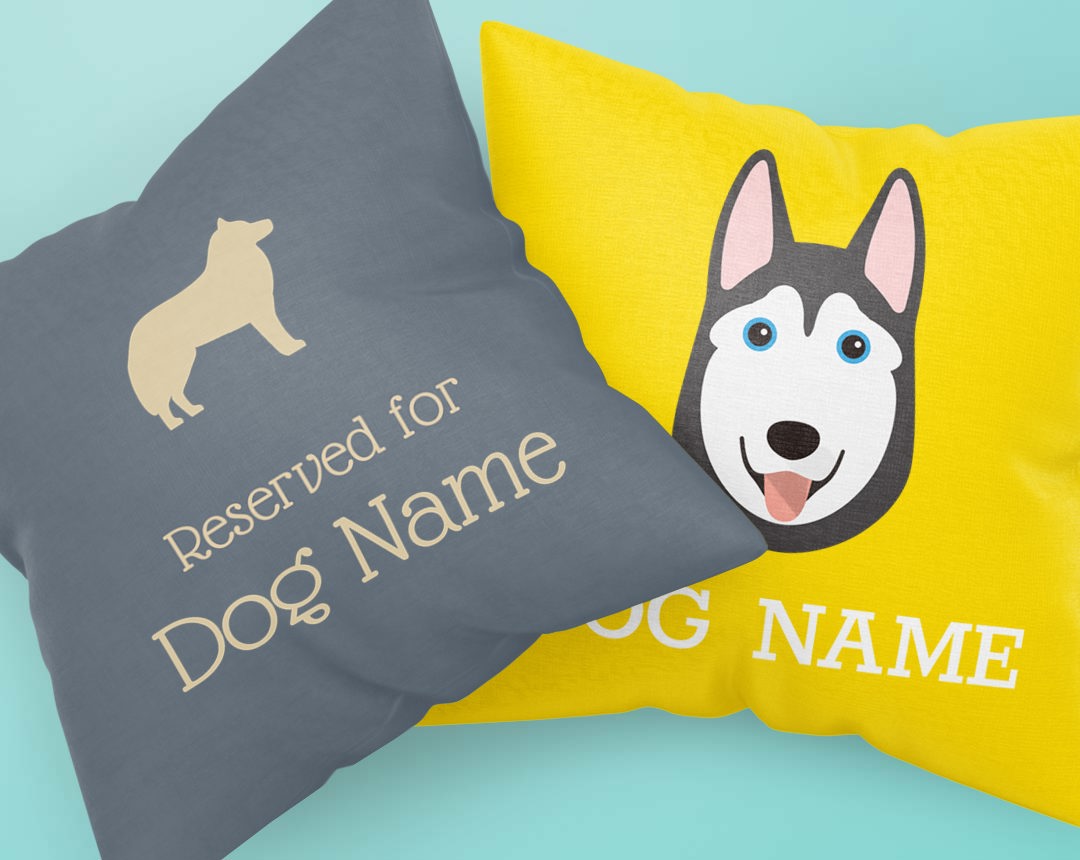 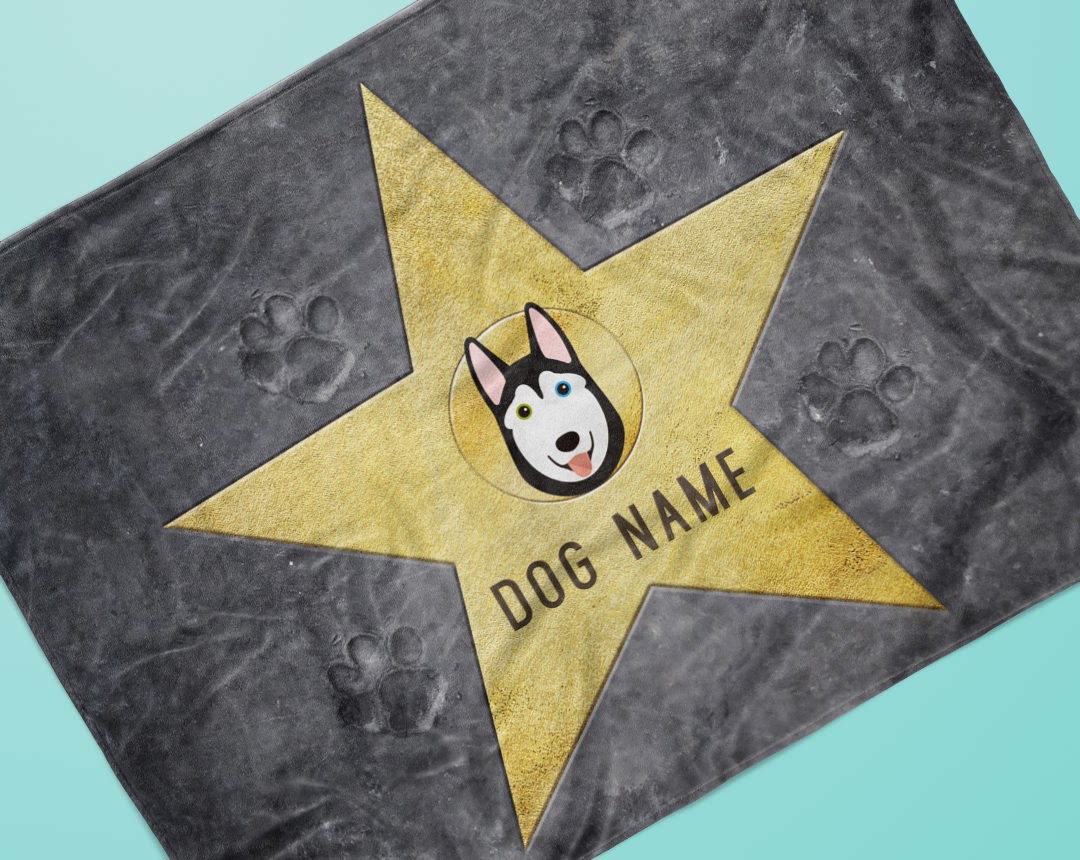 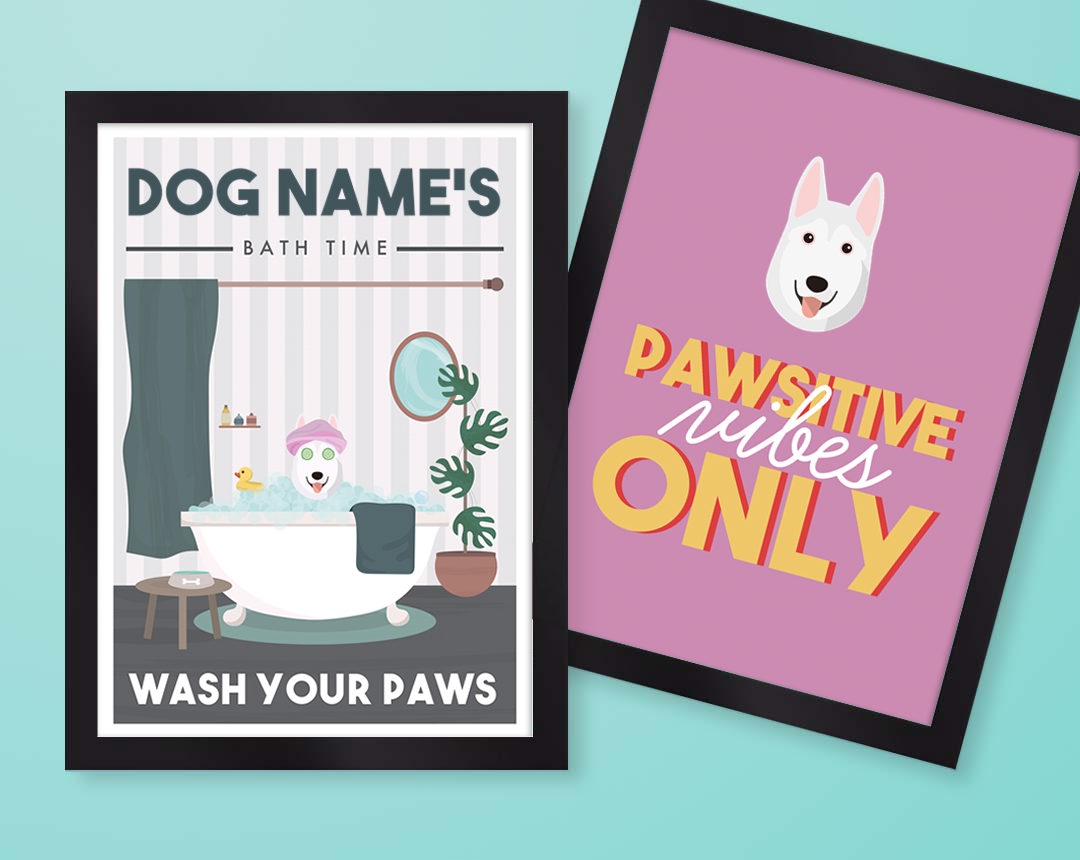 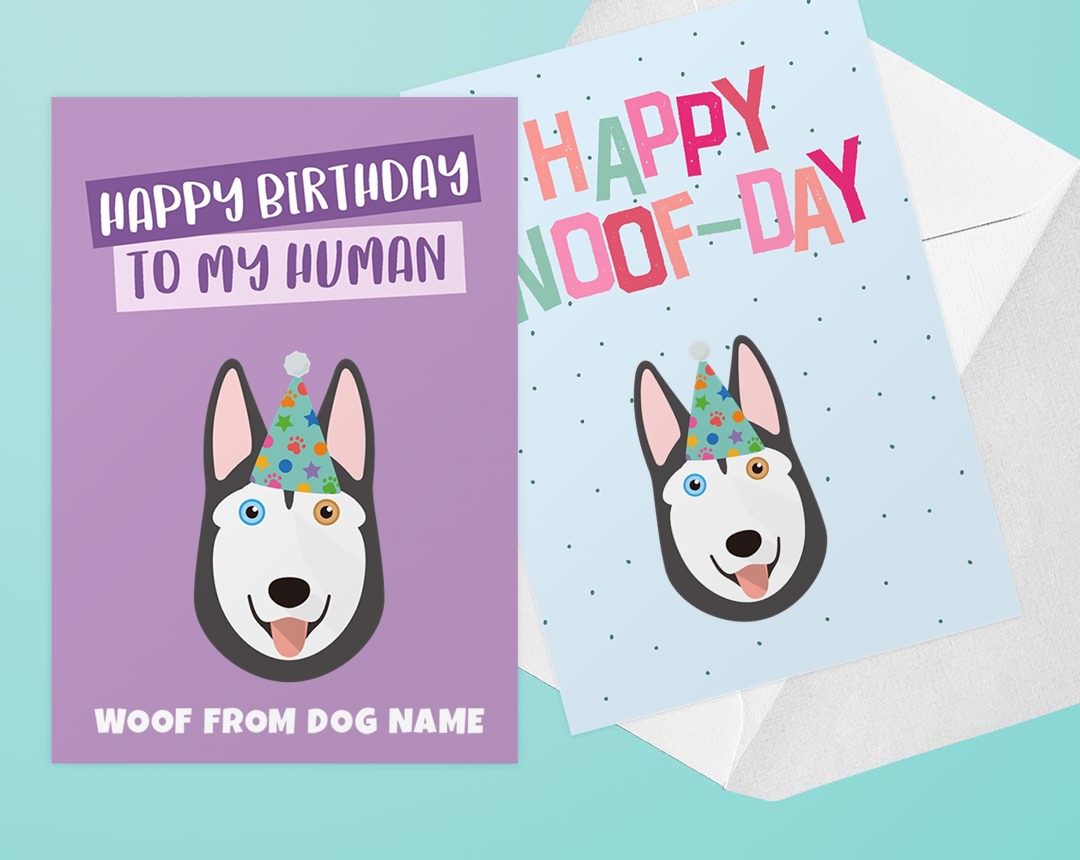 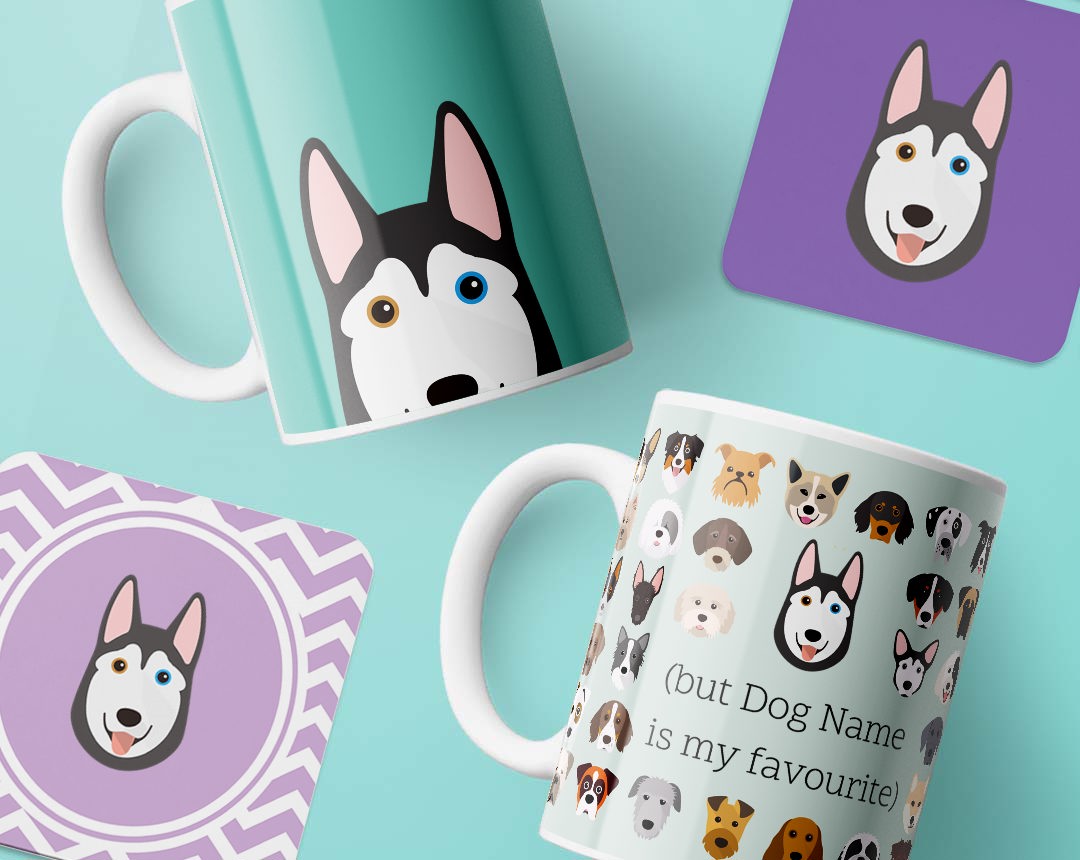 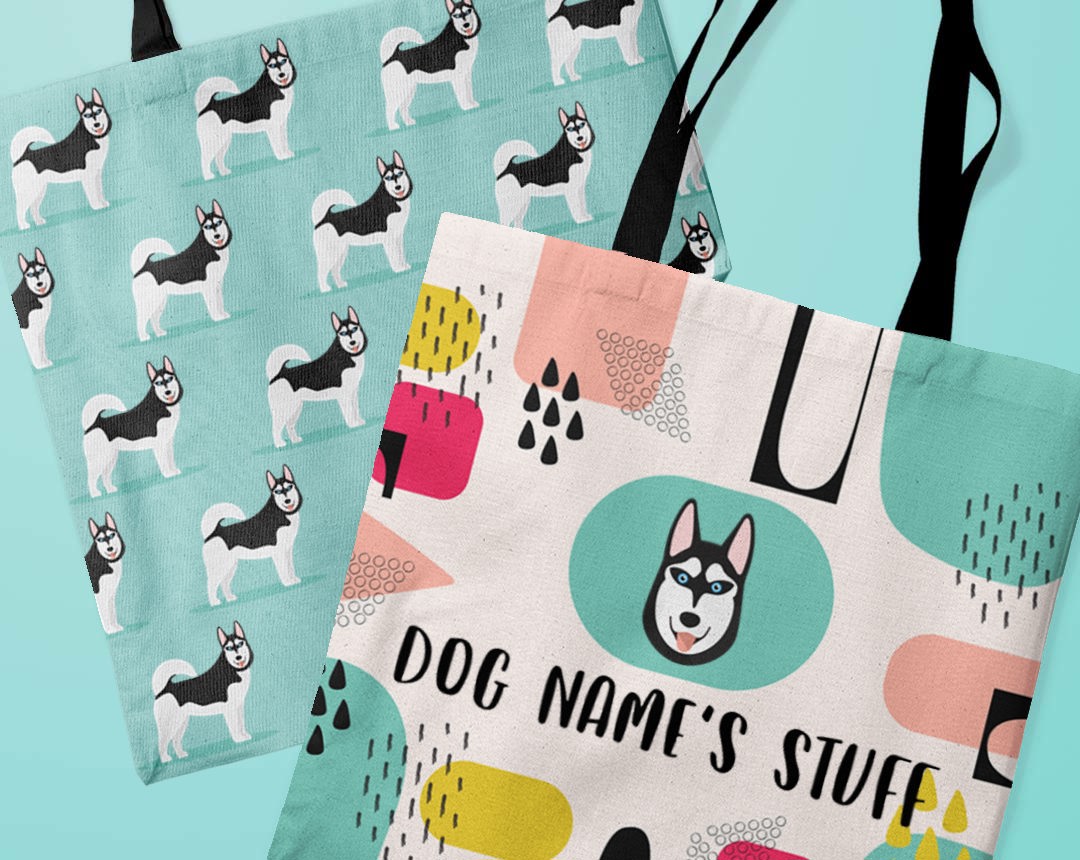 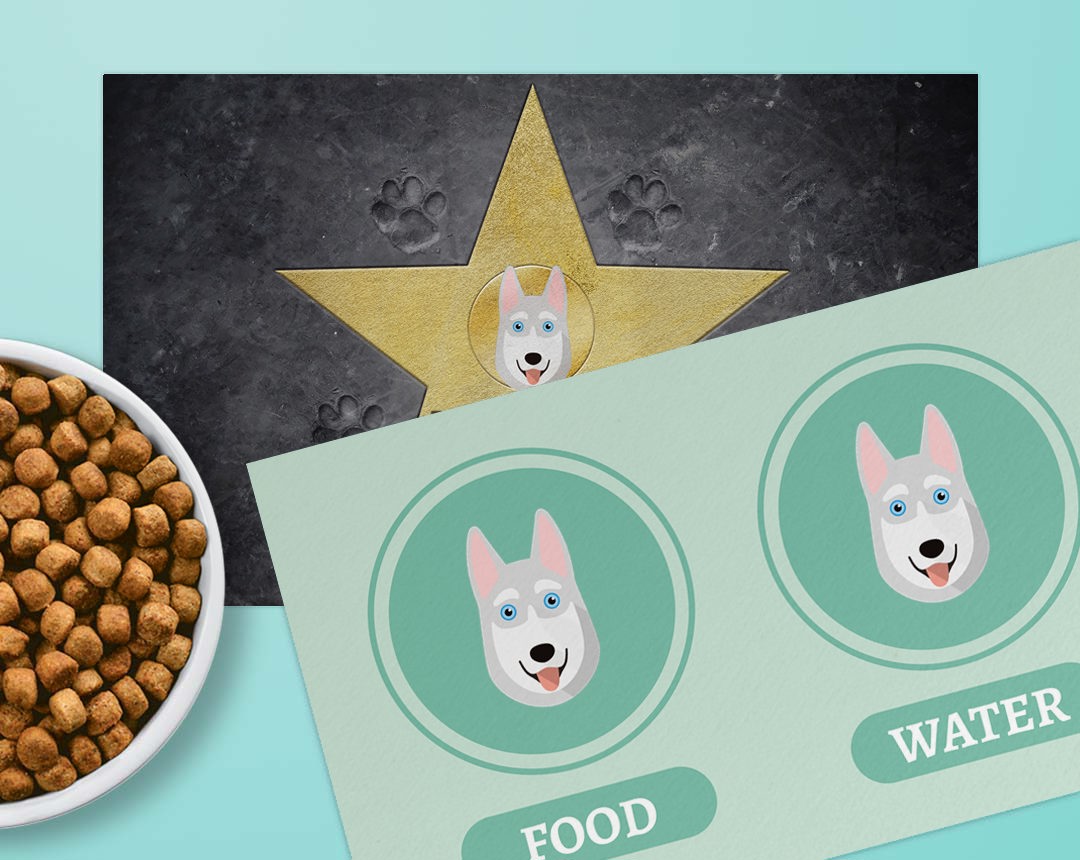 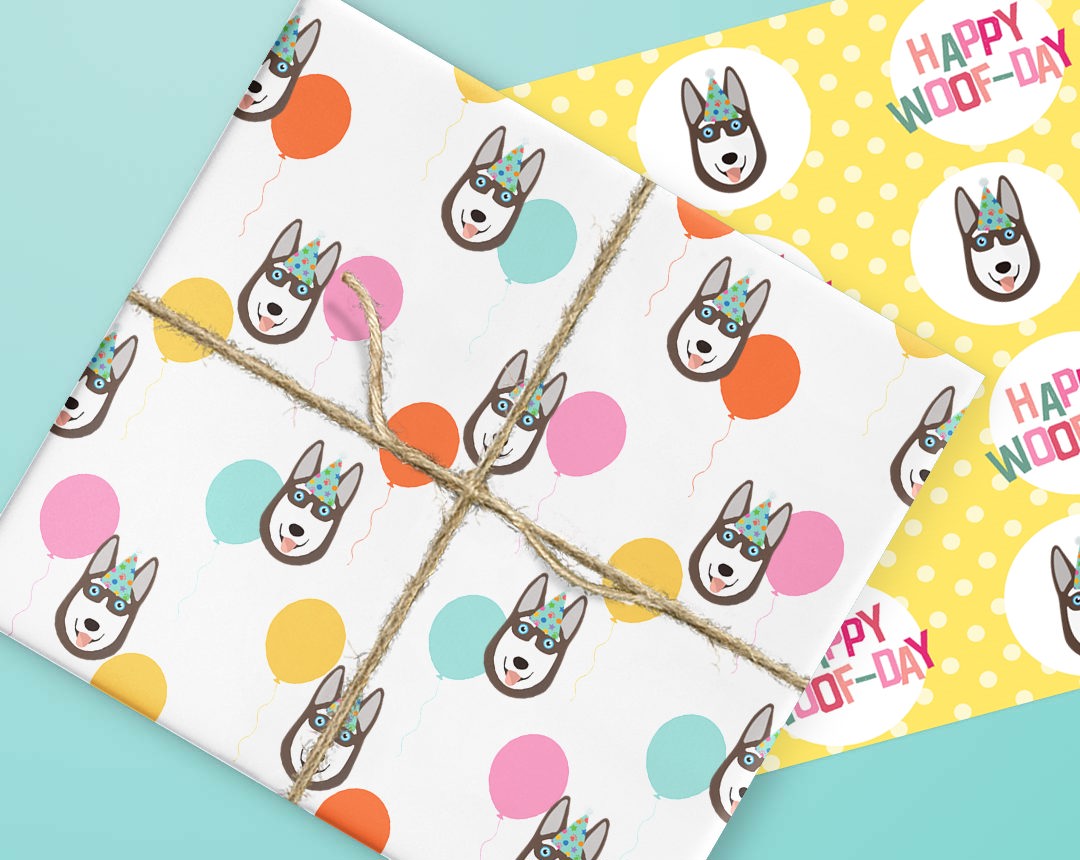 This beautiful dog originated among a tribe of Siberian Nomads. Much of their history is unknown but after many DNA tests, Scientists have confirmed that they are one of the oldest breeds in the world. They originally served as both sledge and family doggies, often sleeping with children to provide a warm and comfy bed! They were eventually imported to Alaska in 1908 and used as sled dogs during the time of the gold rush and also in the All-Alaska Sweepstakes – a dogsled race which still runs to this day! However, in 1930, the Soviet Government closed their borders, which was also the year that the last Siberian Husky was exported. But the breed continued to thrive, maintaining many of the same qualities as their Siberian parents.

Siberian Huskies have extremely high energy and are very athletic due to their vast history. They are also fiercely independent as well, which makes them difficult and challenging for first-time dog owners. This breed is not for everyone. The first thing that you will need to consider with these guys, is that they are cunning escape artists, so you will need a sturdy and strong fenced yard to stop them getting away! They are also highly intelligent and have a remarkable ability to learn so it’s not hard to see why so many end up in shelters, as many breeders and owners simply don’t understand the breed well enough. However, they are truly magnificent doggies, and with the right owners, will do well. They get on grandly with other children and animals and make fantastic family pets, so long as they are treated correctly and given lots of exercise and love.

It is believed that the Siberian Husky were bred by the Chukchi tribe, a nomadic tribe from the Siberian region of Russia. While the exact history of the dog is unknown, DNA tests have shown that they’re one of the most ancient dog breeds in the world and, along with the Samoyed and the Alaskan Malamute, are descended from the original sled dogs. The common belief is that the name Husky comes from the word ‘Esky’, a short form of Eskimo.

Whatever its origins, the Husky was a valuable addition to the lives of the Chukchi. They not only pulled sleds packed with their owners’ belongings, but also curled up with their families at night to help keep them warm in the sub-zero temperatures. Their usefulness was further demonstrated when the American explorer, Admiral Robert Peary of the United States Navy used Siberian Huskies to assist with his expeditions to the North Pole.

In 1908 dogs, which were still known as Chukchis at the time, were imported from the Anadyr River and its environs into Alaska. They continued to be used as sled dogs for transporting people and their belongings during the Gold Rush but, over time, their speed led to the development of sled dog racing, also known as mushing races. The most famous of these races was the ‘All Alaska Sweepstakes’, and 657km (408 mile) race that stretched from Nome to Candle. These races led to the Husky being bred to be smaller, lighter, faster, and with more stamina compared to the freighting dogs, which typically weighed around 45-54kg (100-120lbs). The main breeder of Siberian Huskies at the time was a Leonhard Seppala, and his style of Husky dominated racing from 1909 through to the 1920s.

In February 1925, Siberian Huskies played a key role in a saving the lives of the people of Nome and the surrounding area. Nome was suffering an outbreak of the deadly diphtheria disease, and the closest serum for treating the illness was in Nenana, 1,085km (674 miles) away. Sometimes called the Great Race of Mercy, this perilous journey was a group effort, with a relay of sleds set up to speed up the expedition. A musher named Gunnar Kaasen took the first leg, with Leonhard Seppala and his dogs, led by Togo, taking on the longest and most dangerous part of the run, a 146km (91 mile) trek across the treacherous Norton Sound to Golovin. In all, twenty mushers and around 150 dogs were involved. Today, this lifesaving mission is celebrated each year in the form of the Iditarod Trail Sled Dog Race. It was also depicted - albeit with significant artistic licence - in the film Balto, named after Gunnar Kaasen’s lead dog. A bronze statue honouring Balto and his canine colleagues stands in Central Park in New York.

In 1930 imports of Siberian Huskies ended, when Russia closed its borders. However, that was the year that the American Kennel Club recognised the breed. It wasn’t until 1939 that its neighbour, Canada, registered its first Siberian Husky, although they then called Arctic Huskies. It took until 1991 for the term Siberian Husky to first be used.

The breed began to grow in popularity in the 1930s. This was partly due to Seppala moving his kennel of Huskies to New England, in partnership with an Elizabeth Rickers, and they began to show and race their dogs in the Northeast region. In addition, in 1933, Rear Admiral Richard E Byrd used around 50 Siberian Huskies to assist with his expedition, Operation Highjump, to travel the 16,000 mile coast of Antarctica. During World War II, Siberian Huskies played a key role in the US Army’s Arctic Search and Rescue Unit.

The sled dogs that the Siberian Husky are descended from were believed to have become extinct but in 2006, after visiting the homelands of the Chukchi, Benedict Allen wrote in Geographical magazine that the breed was still alive.